Humbled by the Chaos

So, we recently added another kiddo to the mix:

And he’s been on the outside for 2ish weeks now. This was Andy’s first week back at work, read: Cait’s first week WITH ALL THE CHILDREN.

Now, going from 4 to 5 is, admittedly not as difficult as some transitions we’ve done. I submit that (for me!) going from 1 to 2 kids was the hardest. However, considering how good I feel, and how well I thought I was doing, I should have known to have my guard up.

My Mom-dar was on point the last few days, allowing me to quickly dispel arguments, suggest activities, and know when Sissy was digging through the trash can or sitting in the dishwasher without even needing to be in the kitchen.

Let the record show, if I ever become prideful in my not-so-super Momming, this blog post will act as a reminder of how quickly everything can descend into chaos and provide a necessary dose of humility.

-The kids were caught jumping off a window sill onto a pile of pillows in the playroom (including Sissy). And while Andy worked on an acceptable punishment (trying to also suppress his astonishment and the gutsy-ness of that move)…
-Mateo destroyed his diaper (and onesie), literally filling it until we reached max capacity, overflowed and spread up his back, all while I was holding him. And I just watched as that classic baby-poop-yellow started to seep out of his clothes. Because…
-Lucia stood up from reading in a chair and declared she was covered in ants. Because she was- inside our house, in our living room- covered in the tiniest black ants I’ve ever seen. She’s a pretty cool cat, so there wasn’t any screaming, but there was extremely quick clothing removal and a good heebie-jeebie dance. Just in time for…
-Sissy to come running around the corner carrying my extremely full, open water bottle, which she had probably already back-washed into. 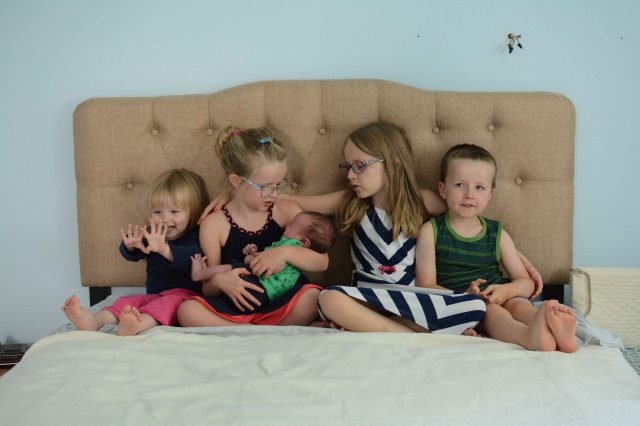 I pride myself in being able to assess a situation and prioritize. I think it’s one of my biggest selling points on the resume I’ll write some day explaining how I qualify for nearly any job based on my training as a parent. But this particular cluster left me a little befuddled and giggling at the absurdity.

Ultimately Andy took diaper dooty (that’s a joke for you Jessie), and I brushed the ants out of Lucia’s hair. Sissy, with a little coaxing, actually put the water bottle down all by herself,  but then quickly found Mateo’s “baba” (binki) and sucked on it until we were all a little less distracted and snatched it away. After the kids were down, we moved some furniture in the playroom so that hopefully there’s no more high-dives off the window sill.

And…phew. We’ll see what tomorrow brings. Hopefully my Mom-dar and prioritizing abilities won’t be quite so tested…

But, who am I kidding. Five kids is a lot of kids. Welcome to your new normal Caitlin. 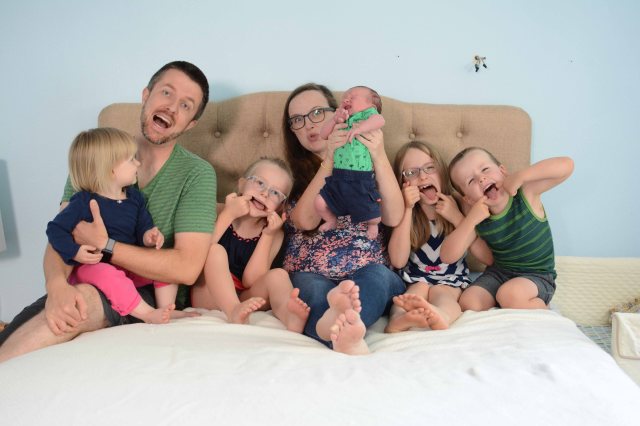 And welcome, everyone else, to Elder- Party of Seven. I’m sure there will be many more tales to come…