Lest you all believe that Andy and I are perfect parents and spouses (and, honestly, with super cute kid photos like these or these, or lovey-dovey posts like this one, I could understand why), here’s  part one of a post that will set the record straight.

It starts with a story. Once upon a time there was a young couple. He was tall and geeky, she was short and also geeky (sound like anyone you know yet?). We’ll call them Boy and Girl. Girl decided that for Boy’s birthday she wanted to invite all his family and friends to go camping at Mt. Rainer. This will be great! she thought. What could possibly go wrong?

Well, the weather. That’s what. Mother nature decided to dump copious amounts of rain on  Mt. Rainier that weekend, and there was nothing Boy or Girl could do about it. However, Boy was an Eagle Scout and Girl was stubborn, so they carried on with their plans, determined to make it a great weekend. Namely, they bought tarps. Lots of tarps. And some string.

Girl’s plans involved arriving at the campsite a day early in order to get sometime alone with Boy (nudge, nudge, wink, wink), hike, and to save campsites for everyone else. This campsite had a reputation for filling quickly on the weekends.

Their small car, packed to the brim (as in Girl had to ride all the way from Spokane with a tent between her legs in the front seat, kind of packed), pulled into the campground. And the rain poured down.

They quickly unpacked the rain-proof items and spread them between three adjacent campsites. Because Boy was honest and Girl really hated getting into trouble, they wondered if they should pay for the other two unused campsites for the first night (they did, don’t worry). Boy evaluated the campsites and Girl, because she hates being wet and cold, sulked in the car (seriously, this Girl was grumpy at Disney Land (the happiest place on earth) because she was wet and cold).

Side note, I promise not to use any more parenthesis within parenthesis. This is just getting out of hand.

It was determined by Eagle Scout Boy that the first step would be to set up base camp. Boy and Girl proceeded to set up the tent they received at their wedding several years previous. The tent that could fit the entire population of Rhode Island, fairly easily. The tent they had never set up before. Because Boy was thorough, he wanted to read the instructions. Because Girl was getting grumpier by the minute, she just wanted to dump all the pieces out and get started. So, Boy read the instructions in the rain while Girl made a ginormous mess with all the tent parts.

Several hours, one soggy set of directions, and two soggy-angry people later, the monster tent was standing (ok, leaning…but only a little bit).

Boy then decided that they should set up the tarps. Because he was an engineer, Boy envisioned a complicated, intricate system of cascading blue plastic. Because there’s an inverted relationship between her happiness and her sogginess, Girl just wanted to cry and didn’t really care what Tarp City looked like.

They stretched out the crinkling blue plastic from branch to branch. Well, they tried. As they contemplated a particularly high branch, Boy told Girl that this was a perfect example of a situation where he really needed that pocket-sized grappling hook he had been wanting.

Girl asked him how exactly he planned to get it down once it was used?

Boy said he would climb the tree.

Girl asked why didn’t he just climb the tree now to hang up the rope?

Boy realized he wasn’t going to win an argument with Angry-Wet Girl and promptly fashioned a make-shift-stick-grappling-hook.

It then took Boy and Girl approximately a thousand tries to get the rope over the branch. As they pulled the tarp taut, water that had been pooling in the tarp dumped all over already-wet Girl.

Girl was done. She sat down in the mud and cried. Boy sat down next to her. They sat together, looking at the soggy firewood, leaning tent and drooping tarps.

Well, we’re awesome. Aren’t we? said Boy, trying to lighten the mood. Because girl was passive-aggressive, she thought about giving him the silent treatment. Then she looked at him, saw how genuinely he was trying to make her feel better, remembered it was his birthday weekend, and got over herself. She smiled.

Yeah, we are awesome, she replied.

From that point on, when something went crooked, or wrong, or just flat out failed, one would turn to the other and say, Man, we’re awesome. Like when Boy forgot to put on bug spray that evening and got bit by a bazillion mosquitoes. Well, I’m awesome, he said and winked at Girl. They got some funny looks from other campers, but they didn’t care.

The sun came out. Boy and Girl went hiking. Friends and family came, filling the campsites with love and laughter. Boy got everything survivalist he could possibly want for his birthday, minus the mini-grappling hook (he would still like one, by the way). And they had an awesome time. 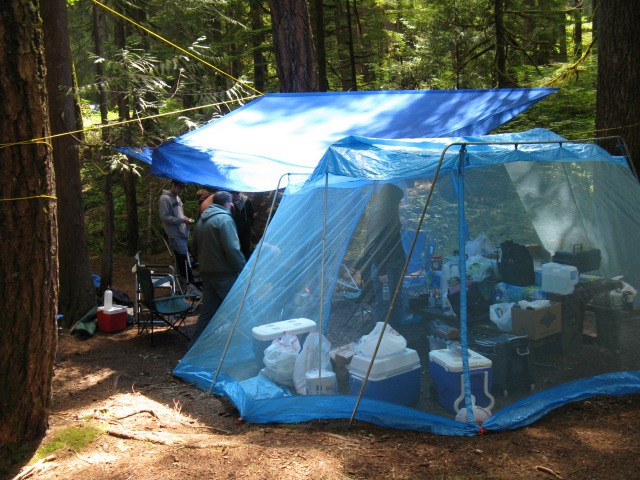 Part 2, how “We’re Awesome” relates to parenthood,  is here. It will have more photos than this one, promise.