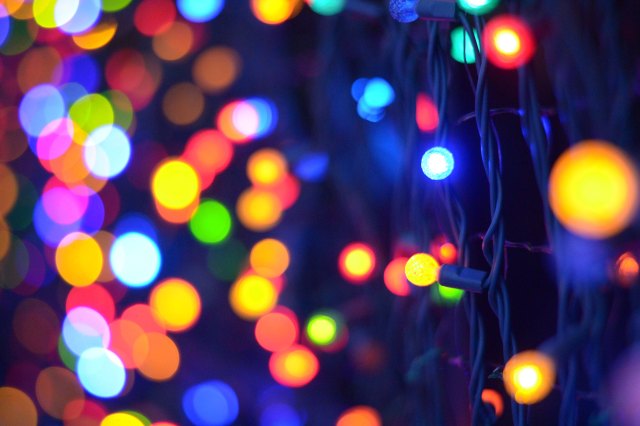 With Ana Clara’s visit during Advent and Christmas, we made an extra effort to seek out awesome things to do in the Vancouver/Portland area. Most activities were major wins, and I would love to incorporate them in following years.

And then there was the beach. Which was fun, but very cold. You’ll see in a second.

This post is quite long, but also has a lot of pretty pictures. Consider yourself warned!

Next time, Future Caitlin, assemble the walls in advance, like hours in advance. Then little (and big) fingers won’t knock over gingerbread pieces or break them.

“With the help of hundreds of volunteers, the Sunshine Division will pack and deliver 3,500 Holiday Food Boxes this December. “

This is a fantastic Portland non-profit run by the Portland Police Bureau. They collect names of people in PDX who can’t afford to buy a Christmas meal for their family. Then they collect loads and loads of donations, organize a billion volunteers to pack the food in boxes, and then another billion driving volunteers to deliver the boxes. It’s something I’ve done with my friend Janelle for a couple years, and this was the first year we were on the delivery team. It was a humbling, beautiful Advent service project.

We bundled up, and fought a little traffic to get there early-ish, around 4:30. But it was so worth it. Easy parking, no big crowds, and a free to get in due to our awesome zoo membership (Thanks Julie and Bob!).

Some of the animals were still awake and out. 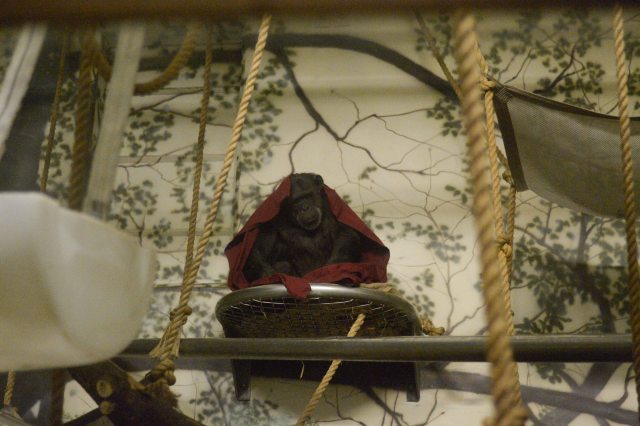 As the park got progressively darker, the lights became more beautiful. 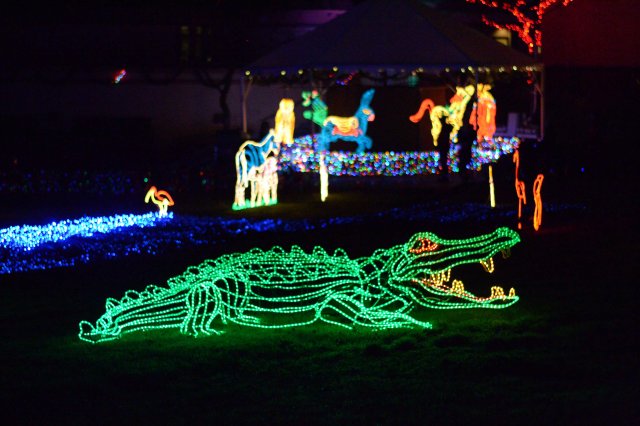 We walked around for about an hour, then ate supper at the zoo restaurant, which I highly recommend, if only for their beer-battered french fries. Mmmm. The only thing we were missing was Andy! 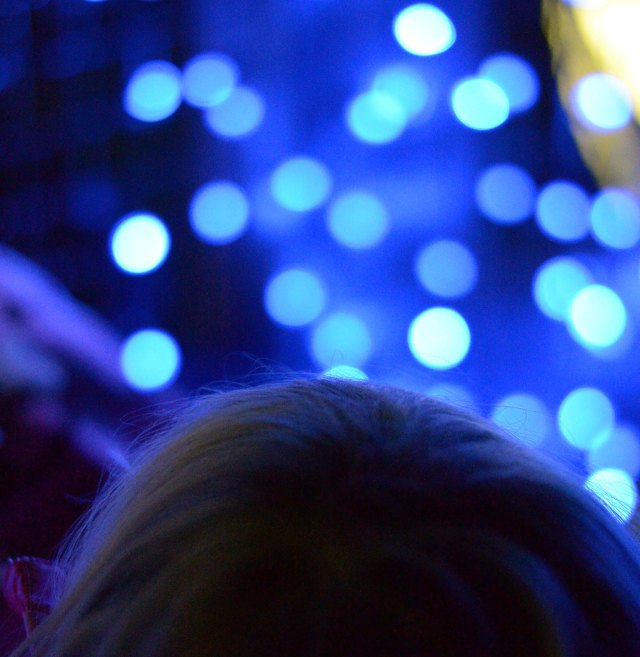 She was fantastic. She sang her little heart out, with such passion and emotion. 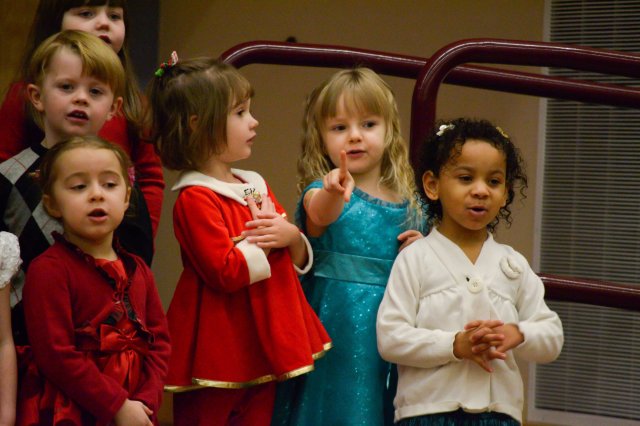 She looked so beautiful, and even grown up in her Christmas dress.

I didn’t invite anyone. Apparently this is the type of thing you invite people to. I’m sorry! I’m still figuring out the whole I-have-a-kid-in-school-thing… Next time! I promise!

Festival of the Lights at the Grotto: Success with an Addendum 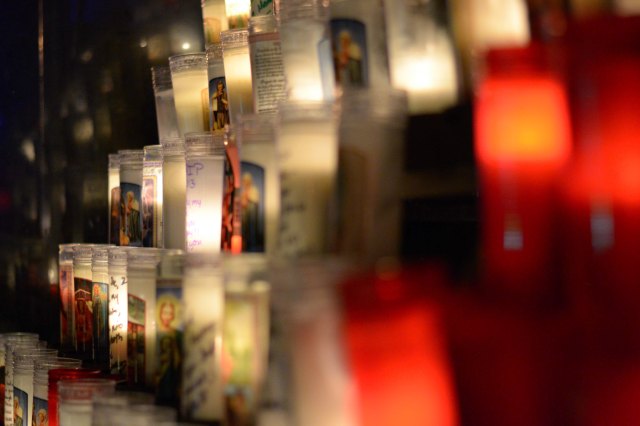 Wow! I had never been to the grotto before. It is such a beautiful, sacred place, and the lights were stunning.

I especially loved the angels placed high up in the trees. The creche was reverent, and Mo was fascinated by the puppet show. 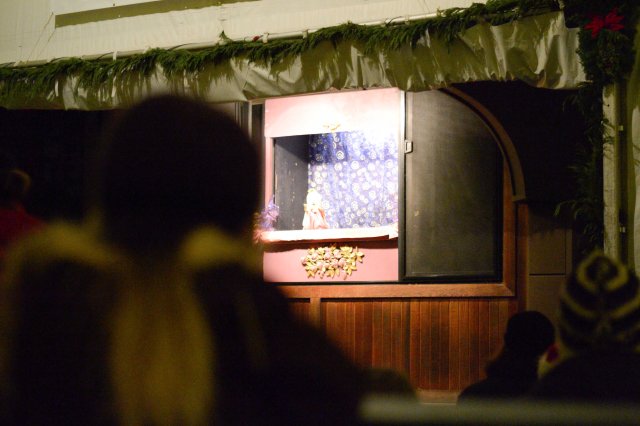 There were concerts every half hour, and all the singing was top notch. Although we arrived at the girls’ bed time, we didn’t have any meltdowns. I’m sure that was a factor of the lights, the petting zoo, the hot cocoa, and the friends.

Addendum: There was so much to see, that although we arrived with a large group from church, we inadvertently split into smaller and smaller groups till it was mostly family and couple units doing what they liked and occasionally bumping into each other. Which is fine. 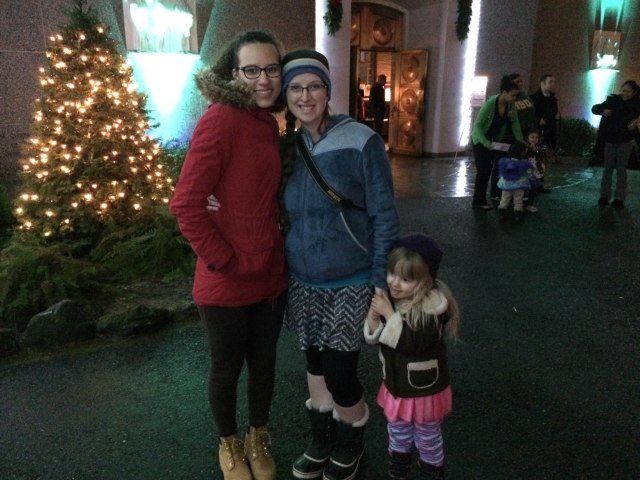 Also, if I want to actually sit and enjoy one of the major choirs singing in the church, it’s probably best to not bring the kiddos. Mo just loves to sing along! And, apparently, help Lulu put her hat on correctly, which Lu protests loudly.

The Oregon Coast: Some Success, Some Fail 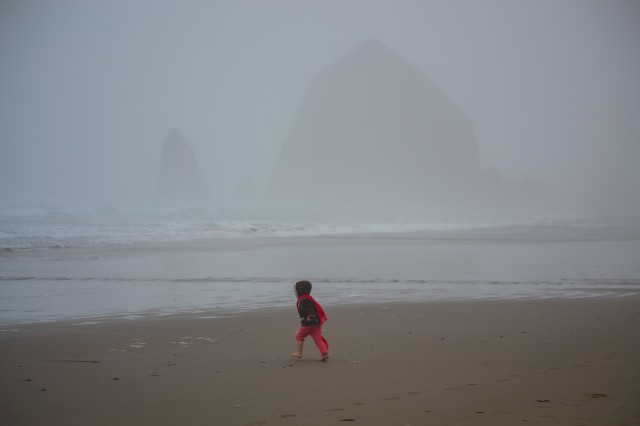 It was really cold. But, honestly, I did the most complaining.

Ana Clara got to touch the Pacific Ocean. 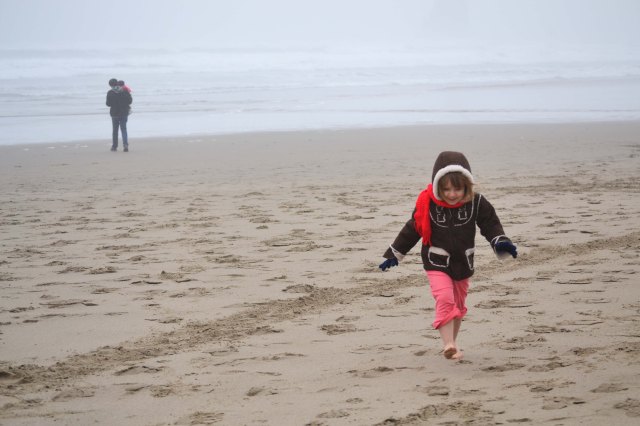 Mo ran around like a crazy person. And Lu laughed and shivered and laughed some more. 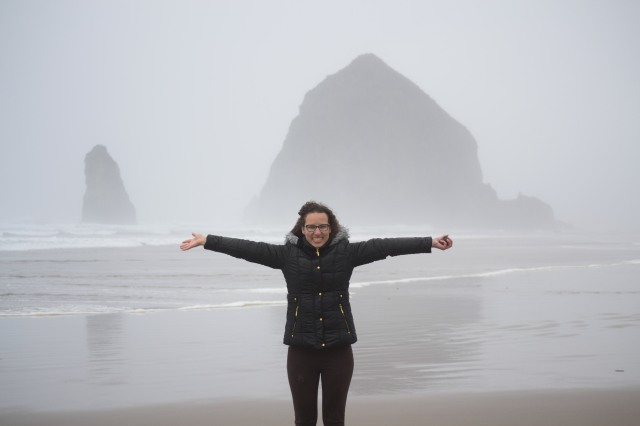 The Seaside Aquarium was cold, but fun. Mo loved the microscope and I got to play with my new 50mm f/1.8 lens. 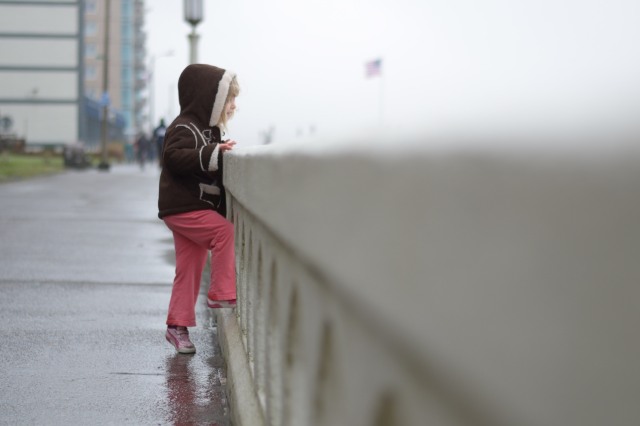 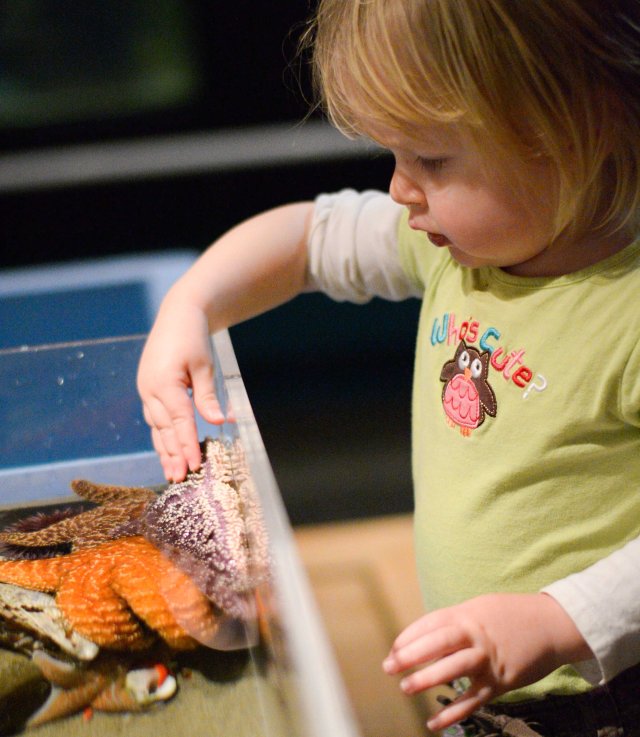 Then we high-tailed it to the Tillamook cheese factory to eat some delicious cheese and ice cream.

Fail: There wasn’t anyone working the the factory at 5PM on a Sunday, so Ana Clara missed out on seeing and awesome part of the tour. Also it was crazy-horrible foggy by the time we drove home. So, maybe next time, if a winter beach trip is in order, we won’t try to do it all in one day. 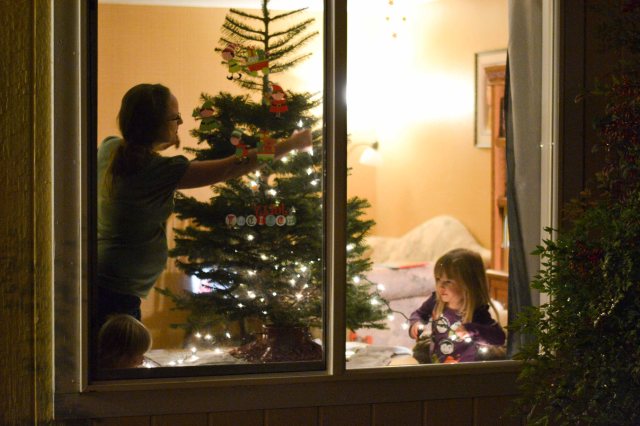 Decorating the Tree on Christmas Eve: Also a Success!

Although our tree was dry and dying by Christmas, I didn’t feel like we were missing much without the decorations. 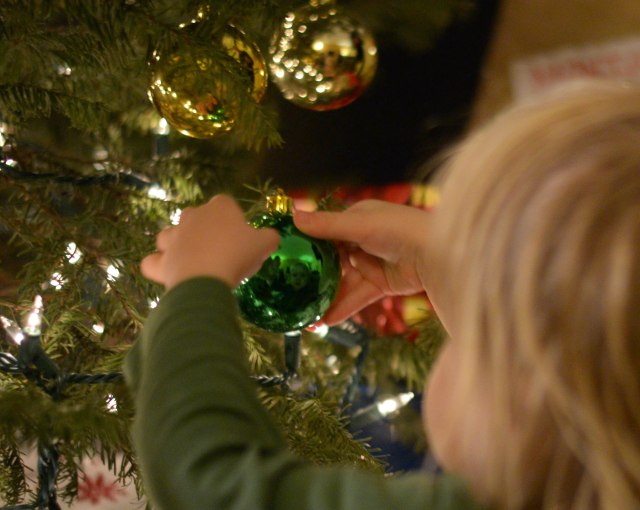 Bonus: The girls (and cats) didn’t start playing with the ornaments or pulling them off the tree until Christmas Day! 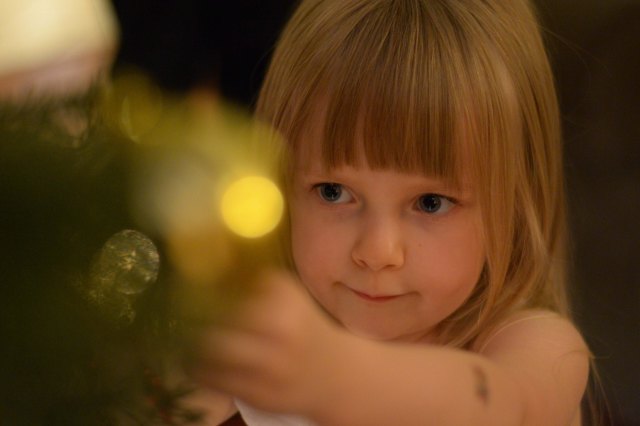 We only had 2 ornament casualties, and one was definitely my fault. I also like having a shorter tree that’s placed up high. There are various levels for gifts to be nestled, and the kids can reach less. With the addition of an 8ish month old for next Christmas, I think we’ll definitely be repeating that particular tradition. To change: We should probably replace our star for next year.

This one is made of tinfoil and cardboard, and is from our second Christmas as a married couple.

Aw. But now we’re supposed to be grownups and use, you know, adult things. I think a real star (or angel) falls into that category.

This may be my most favorite thing we tried this year, and it was kind of inadvertent. Most of our family was arriving on the 26th, so we postposed our major Christmas dinner till that day. Instead, Ana Clara and I prepared some traditional Brazilian dishes, with minimal clean up. No one had to leave present opening to check on a turkey or start peeling potatoes. It made the day feel much more relaxed and intentional.

Board Games on Christmas Eve, Christmas, Day After, or Whenever there’s a large group of people: Success, as I wrote about here.

To try next year:

More about St. Nich and less about Santa:

Andy and I struggle every year about whether or not to include Santa. This post from Haley’s husband at Carrots For Michaelmas helped convince me that it’s ok for our kids to not think Santa is real. Our faith already provides so many mystical miracles to consider.

This post from Simcha started me thinking about bringing the kiddos to midnight Mass next year. However, we went to 10 AM Christmas Day this year, and it worked perfectly. We woke up, got the breakfast casserole in the oven. Opened stockings. Ate breakfast. Went to Mass. Came home. Opened presents. Napped. Opened more presents… So I’m not sure I want to mess up a good thing… This will take some more pondering. And I’m open to suggestions and opinions!

I’d like to find new and better ways to celebrate the 12 days after Christmas too. We reserve some presents and open a couple after Christmas. We watch the Three Wise Men travel around the living room till they arrive at the Manger on Epiphany. Any ideas? Suggestions? Traditions that you have?

There you go, Future Caitlin. Don’t forget to check back here next year when you’re racking your brain for Advent ideas and Christmas Traditions!

4 Responses to Christmas Wrap Up